Considering the ongoing popularity of the Fast and the Furious franchise, it should be no surprise that there is a long and ongoing history of cars getting a lot of love from audiences, dating all the way back to the classic era of cinema. Really, as long as there have been fast cars, there have been movie cameras following them. You can see this during car chase sequences in several old silent films dating back to the early 20th century!

Despite how long our cameras have been recording cars though, we really didn’t start seeing a full appreciation of them until the 1960s and 1970s. That’s when all the super-cool cars started making their grand debuts, from James Bond films to Steve McQueen classics like Bullitt. It’s hard to pick out which were the coolest cars during this classic era, but that’s why we’re here to help.

Continue reading to learn about the top five coolest classic cars in movies!

Making its first appearance in what many consider to be the finest film in the series following our favorite British spy, 1964’s Goldfinger, the Aston Martin DB5 is undoubtedly the coolest car ever to be seen onscreen and was featured in other entries in the series. It was even cool enough to feature an awesome cameo in the recent Daniel Craig-starring Bond film, Skyfall in 2012 (though sadly it was destroyed by Bond’s nemesis, but let’s not talk about that; it’s too traumatizing). 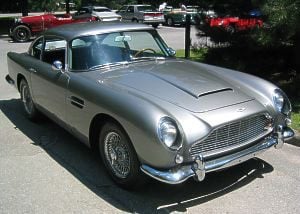 While the regular Aston Martin DB5 doesn’t come with all the cool gizmos and defensive gadgets like the bullet-proof shield, the tire slashers, the smoke screen, forward-facing machine guns, and — of course — the iconic ejector seat, it’s still an amazing car.

Its 4.0 liter aluminium engine moved the car to a maximum speed of 145 miles per hour with an acceleration of 0-60 miles per hour in 8 seconds. No slouch in the specifications, it certainly isn’t an eyesore to look at either!

2. The 1970 Dodge Charger from The Fast and the Furious

When it comes to cool classic cars, it’s hard not to mention Dominic Toretto’s now famous 1970 Dodge Charger from the original The Fast and Furious. The original film went on to spawn half-a-dozen sequels (and counting), due in no small part to the action-packed sequences involving an incredible array of classic cars.

There are some other great vehicles in the film, including the 1995 Toyota Supra or Brian’s 1995 Mitsubishi Eclipse GS that he starts out with early on in the film. But Toretto’s Dodge Charger takes the cake for the coolest classic car.

The Dodge Charger in The Fast and the Furious is obviously souped up from what you would normally get if you got your own, thanks to the folks at Cinema Vehicles — a go-to Hollywood custom auto shop. But Toretto’s ride does showcase many of the Charger’s coolest qualities, such as its 390 horsepower engine, making it a true beast of a muscle car. Obviously, we won’t encourage anyone to get involved in illegal street racing, but you can really feel the power at your fingertips when you’re behind the wheel of this car.

Bullitt is often hailed as having one of the best car chases in film history, not to mention just being one of the coolest car chase films of all time. This is largely because of Steve McQueen’s utter coolness behind the wheel that’s only amplified by the car he drives: a 1968 Ford Mustang 390 GT. 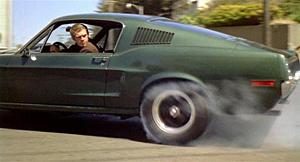 Whether McQueen is peeling out or swerving around a corner during that iconic chase sequence, you can feel the power of the 4.9 liter V8 engine at work.

Here’s a fun fact for you: the ‘68 Ford Mustang GT was a perfect match for McQueen, who, as you may or may not know, was a professional driver already, thus doing all of his own driving stunts!

While the new Mini Coopers used in the 2003 remake of The Italian Job are certainly really cool in their own right, this is a list of classic cars, so we’re going to jump back to the 1969 original version of the classic caper film starring Michael Caine and its use of the original, super-cool 1969 Mini Cooper S.

While the Mini Cooper doesn’t exert as much raw power as the other entries on our list, this versatile little vehicle holds its own with the big boys. If only for that great shot of the car emerging from the sewer tunnel, something faithfully recreated for the aforementioned remake. You can’t say that any of the other cars on this list could accomplish something that cool.

Even though this car is from the newest film on our list, it features one of the coolest classic cars on our list: the 1972 Ford Gran Torino from the aptly-named Clint Eastwood 2008 film, Gran Torino. Having it serve not just as a meaningful gift given to one of the film’s main characters is an inspired choice, but it also manages to have the weight of Eastwood’s long-standing coolness behind it. It seems to be the embodiment of his storied career.

Its V8 engine serves as a reminder of his toughness in almost every film he’s been in and its sleekness can bring to mind all his cool, calm vigilante characters, like The Man With No Name or Dirty Harry. It might sound silly to some, but given this, it was a fitting way to represent the culmination of a Hollywood legend’s career and accomplishments by using such a cool muscle car as the 1972 Ford Gran Torino.

So those are the top five coolest classic cars to grace the silver screen. Hopefully reading about these cars inspires you to return to these films, or perhaps even consider making an investment in one of your own!

Scott Wolff is a freelance blogger who has been writing about cinema history for nearly 10 years. When he’s not brushing up against a deadline, he enjoys hitting up his local movie theater in downtown Denver.

Offer for new and qualifying former customers only.

Premium Channels: 3 Mos. Free: After 3 mos., you will be billed $30/mo. for Showtime, Starz, and DISH Movie Pack unless you call or go online to cancel.

Other: All packages, programming, features, and functionality and all prices and fees not included in price lock are subject to change without notice. After 6 mos., if selected, you will be billed $9.99/mo. for DISH Protect Plus unless you call to cancel. After 2 years, then-current everyday prices for all services apply. Free standard professional installation for TV only. Internet and phone services are provided by partners, require credit qualification, and will be billed separately. Internet prices shown do not include guarantees. Equipment lease charges may apply. Leased equipment must be returned upon cancellation or unreturned equipment fees apply. 99% nationwide signal reliability based on a nationwide survey of DISH customers. Watching live and recorded TV on DISH Anywhere requires internet-connected Hopper and compatible mobile device. Miscellaneous: Taxes or surcharges may apply. All packages and offer subject to change without notice. Additional restrictions may apply. ©2022 DISH Network LLC. All rights reserved.